Jesus said, Father, forgive them, for they don’t know what they are doing.” Luke 33:34

Is there a person in your life who is difficult to get along with?

I know there is in my life. They have hurt me in so many ways that it affects my character. Sometimes, I wonder if they harm me on purpose or if it’s just second-nature for them.
Jesus, hanging on the cross, looked down and saw soldiers — the ones who had beat and ridiculed Him and who ultimately nailed His hands to the beam. They were gambling to see who could get His only possession: His bloodied clothes. 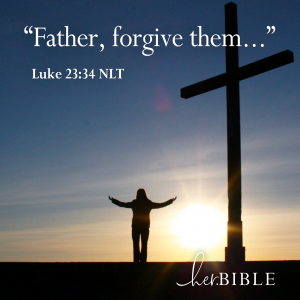 In that moment, Jesus’ character — who He was — rose above unimaginable pain. Seeing beyond the rough exterior of foreign, dirty soldiers, Jesus peered deep into their souls. He saw their pain from the past. He also saw their pain in the future. It all hinged on His forgiveness.

Would He be able to forgive these men? Would He be able to take on the sin of not only these people but of all humankind? Would He take on my sin? Even in His weakened and vulnerable state, Jesus did not give into anger, self-centeredness, self-righteousness, or revenge.

“Father, forgive them, for they don’t know what they are doing,” he pleaded, requesting forgiveness from His Father, who had the power to rain down fire on the soldiers. In that moment of human weakness, Jesus didn’t sin. He gave unselfishly of Himself and His rights to grant others something they didn’t deserve: forgiveness.

Do I still struggle to forgive? You bet I do! But just as Christ forgives those soldiers and me, I have the choice to look at the person who hurts me every time they wrong me and think, “Father, forgive them, for they really don’t know what they are doing.”