In Biblical times, potters were necessary components of a community. They produced the dishes, containers, cooking implements, and storage pieces needed by everyone in daily living. Biblical imagery is often lost on us because potters today are artisans who create for display rather than everyday needs.

Clay was readily available in Palestine in Jesus’ time. When gathered, it required preparation before use because it was either too wet, too crumbly, or filled with sticks and pebbles. Potters often had helpers who would clean the clay—much like the Holy Spirit, God’s Helper, who reminds us how to live in holiness. 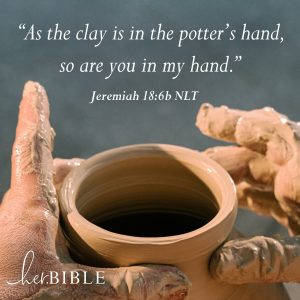 Two essential steps were required to make valuable ceramics. The first was kneading, creating consistency in texture so the pot would hold up when fired. This step was hard work, with persistent pressure that works out air bubbles that could ruin a pot.

When the clay was ready for the wheel, the next important step was centering the clay while the wheel turned to make a uniformly consistent pot. Clay is not cooperative; its very nature moves from the center while the wheel is spinning. Force is needed to shape and center the pot; the potter leans his elbows against his knees to apply equal pressure from both hands. We fight centering; our hearts are prone to wander.

When the pot is finished, it is set aside to dry completely. Moisture causes breakage when fired. When it’s bone dry, it’s in its most fragile state. It’s then fired, and the intense heat is what makes it strong and resilient. The second firing glazes and seals it to make it ready for use. Potters rarely fired single pieces; many were fired together to fill his kiln. We’re still fired in community, made to bear each other’s burdens.

It’s not the pot that makes the difference; the potter knows what He wants to accomplish through His creation. Too often, we have “pot envy”–wanting to be like someone else. But who we are is His unique design for us. Submitting to the potter gives Him the freedom to make us according to His intention.