Anjelina Maldonado and her husband, Javier, opened Proximity Church in Orlando in 2015 primarily as an outreach to the “unchurched and prodigals in Florida.”

They placed people in small groups for discipleship, one being an eight-week women’s Bible study using her.BIBLE to listen to the Word of God.

The women, about 20 in all, were captivated the first time they listened to the Book of Ruth. 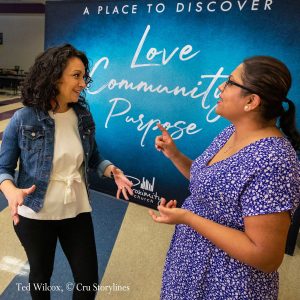 “To feel your faith being built up by another woman is awesome,” says Anjelina. “From a church with no believers to a body of women being built up is incredible. They never even knew each other and now were connecting over her.BIBLE.”

When Anjelina played the Book of Ruth, it was the first time Ingrid Fernandez, a nurse, had ever heard the story. She drove home that night and, though she was pregnant and had her young son in the back seat, sat in her car to hear the rest of the book.

Ingrid began listening to her.BIBLE during her commute to work. She found inspiration in the stories of women like Esther. “Esther thought she was going to be no one, and she ended up a queen,” Ingrid said.

Ingrid knows that the Word of God would have changed her life no matter what, but hearing it in women’s voices was like “having the right soundtrack to a movie.” 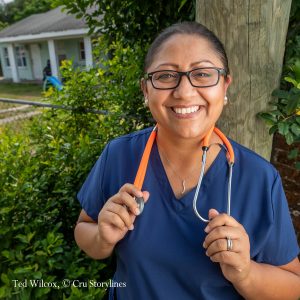 She said, “Like, in Ruth, it’s a female voice and it’s talking about a woman who went and conquered. It’s like saying, I’m just one person, just a nurse, just a woman; but with God, [I] can do anything.”

Ingrid regularly attends Proximity and now so do her husband, Enzo, and children. She dreams of leading a small group to reach her family members who don’t yet know Christ.

Ingrid relates to women who feel like they just don’t have time to sit down and study their Bible.

“Women are always going-going,” Ingrid said. “It makes it challenging. But if they can find a moment in the car to listen, give God the chance — the chance to tell them they’re loved and very valued to him.”

(You can read the full article by Rebecca, “Highlighting Women’s Voices in God’s Story,” in the July 2021 issue of Cru Storylines at https://www.cru.org/storylines/2021/july/highlighting-womens-voices-gods-story.)